The nose, which attracts the most attention after the eyes on the human face, has always been considered as a complementary element of beauty. In ancient societies, the definition of beautiful nose constantly varied, sometimes arched and big nose were accepted as the indicator of nobility, and sometimes they were used to describe different races. Today, the form considered optimal is determined by the average result of measurements on the (European) white human race. With the increase of communication technology, hospital qualities and population, Rhinoplasty has become one of the most performed surgeries in the increasing aesthetic flow.

What is nose aesthetics?

It is a plastic surgery that causes congenital discordant image or to eliminate deformities in the nose after trauma. With this surgery, it is aimed to obtain curved cartilage that prevents the breathing and to get a nose that is more comfortable with the breathing of the nose, which is bigger than normal.

Who can have a rhinoplasty?

Anyone who has reached the age of 18 and has no obstacles to general anesthesia may have this surgery. You should make the decision of rhinoplasty yourself, because your face is yours and the decisions to be made about it must be yours.

Regarding the patients, the regions to which they complain are determined. By taking the photos, it is aimed to create a natural nose compatible with the face through a common shape with the photoshop image. At the same time, by examining the intranasal nose, the problems causing obstruction in the airways are detected and these areas are intervened with the same operation.

The image made with Photoshop may not always be exactly the same as the post-operative image. Because factors such as age, gender, thickness of the nasal skin, accompanying chronic diseases, and alcohol use are out of the evaluation of this animation program. The aim is to reveal the shape that the patient wants and the surgeon wants to make and talk about the changes that can be made.

If you have previous surgery, high blood pressure, diabetes, chronic diseases such as goiter, allergy to any medicine or food, you should definitely inform if you have medications you have to use.

Preoperative examinations are prepared on the same day or 1 day before. You should not eat or drink anything 8 hours before the surgery. If the results are evaluated by the anesthesiologist and there is no obstacle, your surgery can be performed. The patient will not feel any pain during the procedure as it is performed under general anesthesia. The average operation time is 2_ 3 hours and the time spent in the operating room will be longer after the patient is put to sleep and awakened. According to the procedure to be performed in correction surgeries such as revision rhinoplasty, the operation may take longer or shorter. 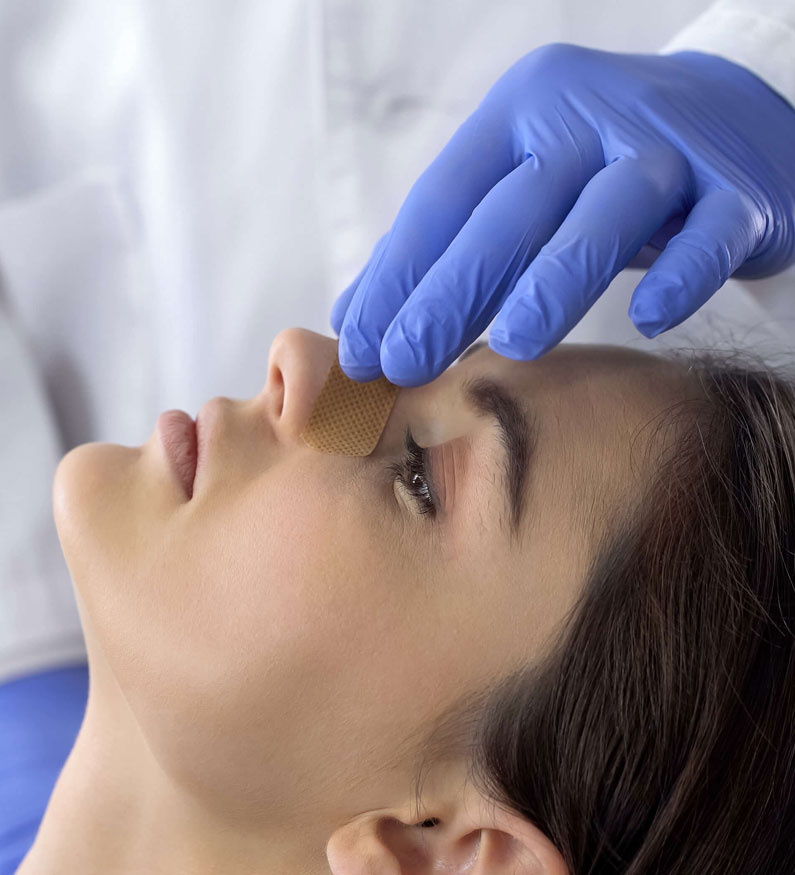 Send us your information. Let’s call you and make your appointment!

After the procedure, painkillers and antibiotics will be treated at the hospital service. In addition, ice is applied on the nose to reduce edema and bruising in the early period. The next day, after your control examination, you will be discharged by editing your prescription.

Glasses should not be worn for at least 2 months after surgery. Any weight, pressure on the shaped cartilage and bone structure will have a negative effect. In addition, you should take a break for heavy sports for at least 1 month. You can swim in the sea 10 days after the surgery in the summer. If you have been operated with open rhinoplasty technique, it will be sufficient to use sunscreen on the seams. Sea water will help you reduce the edema in the nose and breathe more easily.

Will there be bruises or swelling?

There may be some bruising or swelling after the rhinoplasty surgery or none at all. The amount of this depends on the shape of the nose, the skin structure of the person, the surgical technique and the surgeon´s hand. However, it is not a success criterion that affects the nose shape that will never appear. In other words, the fact that the bruise is low, does not mean that it will be a good nose, and that it does not mean that the result will not be good. The aim is to have an open nose in the airways that the person will look for with life. If there is a bruise, the first 2 days will appear quickly and likewise disappear quickly within 5 days. Edema manifests itself for a longer period of time. The lower half of the nose is the region where the edema will disappear last, as the skin is thicker and oily. What we call the nasal contouring is that the edema in the nose disappears completely and the cartilage bone structure and the skin are in full contact with each other.

Which Rhinoplasty technique is the best?

Basically, rhinoplasty techniques are divided into 2 as open and closed. If the cut made from the inside of the nostrils, which is different from each other, is combined in the skin structure between the holes from the outside, it is called open rhinoplasty and if not, closed rhinoplasty technique is called. The two techniques are advantageous and disadvantageous compared to each other, and we cannot say that closed or open rhinoplasty alone is better. The number of scars left on the heads of patients in open rhinoplasty will remain. Although there may be a slight pinkish appearance in the sutures in the first 2-3 weeks period in the early period of the operation, this scar gradually decreases in the future, mostly it will disappear almost 3-4 months later.

In closed rhinoplasty, the incisions are made on the inside of the nostrils in reverse U shape and there is no incision that is visible from the outside, but the procedures that can be easily performed in open rhinoplasty are tried to be done in a slightly more restricted manner.

In short, if we remove the shape of the nose that will occur, the factors that depend on the patient, it does not depend on the technique, it is the experience and competence of the surgeon in this matter.

When is the shape of my nose formed exactly?

The book information is that the recovery will be completed after an average of 12 months after surgery. However, this period may be 6-7 months for young, female, thin skinned and non-additional health problems, and this period can sometimes last 12 months for men, thick-oily skin and middle-aged people.

Which season is more suitable for surgery?

You can have surgery in every season with the developing hospital operating room technology.

When can I get back to work?

On the 7th postoperative day, a plaster is placed after the nose splint and stitches are removed. You can start work on the 11th day, whether with plaster or plaster.

What should I watch out for after the surgery?

On the third day, after the bumper is taken on the 7th day, your first control examination is made on the 14th day. Especially in the first months, strictly no smoking should be protected, protected against impacts, and skin-covering make-up such as foundation over the nose should not be applied. You should do your massages regularly as shown to you, and should not disrupt your control examinations.

Can there be a difference in the nostrils?

If there is a difference in the holes before the operation, there is a tendency in the middle cartilage structure, which is probably what we call septum. This structure is corrected by surgery, and the holes are made equal to the middle line. Although there may be a slight difference for the first time due to the change of the skin structure due to this inclination, it will be equalized or minimal difference may occur when the skin accumulates itself over time. However, if the nostrils are equal before surgery, they remain equal after the operation.

In nasal aesthetic surgery, all operations are done by cartilage and bone structure shaping. Thin skin shows all details easily, while thick skin is more annoying in this regard. Because, although the surgeon performs a good procedure, the skin closes this structure like a thick covering. Although some subcutaneous tissue is removed during the operation, this does not mean thinning and it cannot change its character and obtain a thin skin.

In aesthetic surgeries that are completely dependent on hand skill, the fees vary depending on the value that the surgeon makes for his own job and the hospital where the surgery is performed. In addition, factors such as the shape of the nose, the features of the procedures to be performed, whether there are revisions or not, cause the fees to differ from patient to patient.

What is Non-Surgical Nose Aesthetics?

In people with mild low end of the nose, more than normal cavities in the forehead passage, and a light arch on the nose, correction of the profile image is achieved by using the filling (hyaluronate). However, as much as possible filling should be done in order to avoid a rough nose shape in the front view. The permanence of the filler ranges from 18 to 24 months on average. Sometimes the body turns the filling perimeter with a capsular structure, causing the filling to be permanent. Apart from that, I do not recommend performing operations such as lifting the nose with unopened noses. 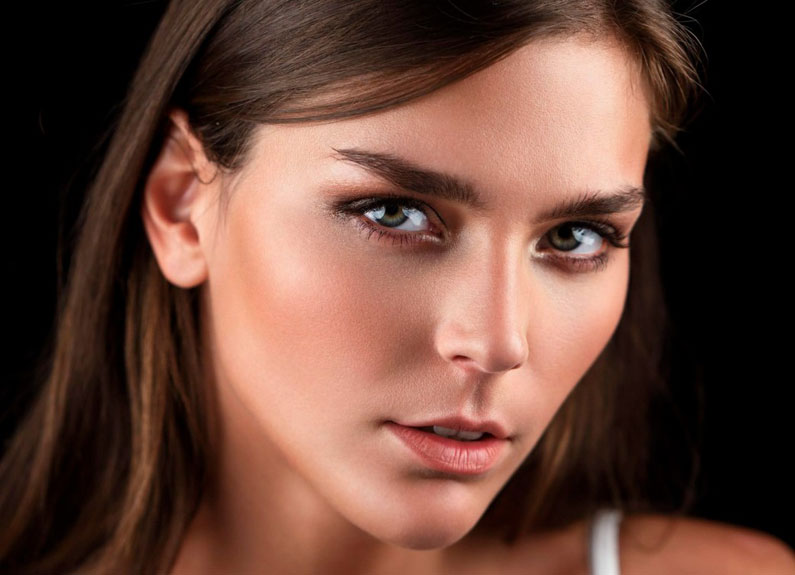 What are the Risks of Rhinoplasty Surgery?

In operations performed under general anesthesia, risks can be divided into 2 depending on anesthesia and surgery. Considering the developing anesthetic equipment and technology, procedures are performed much more safely than in the past. Laboratory tests performed before surgery are checked and if necessary, consultation is requested from other branches. If you have a chronic illness, an allergy to any medication, a problem you have had in your previous surgery, you should definitely tell. You should not eat or drink anything 8 hours before the surgery. You should follow this rule to prevent any food in your stomach from leaking into your lungs during surgery and experiencing major problems.

With regard to the surgery, there may be bleeding in the form of leakage from your nose in the first 24 hours after the operation (this is often the result of septoplasty and intervention in the nasal meat).

Since it is a visual and functional operation, you should explain the nose shape you want to see with the surgeon and consider the surgeon´s views on this issue. No surgeon can say 100% precise results for any surgery. If you are going to have surgery to correct your curved nose, you should know that there is a slight chance of opening, albeit a low probability. The reason that the nose, which looks flat after the operation, opens slightly over time is due to the return of the main nose cartilage. In such cases, the amount of the opening is evaluated, if necessary, the problem is solved by the second operation or a small amount of filling is touched to this area.